CPep is an implementation in standard C of the chemical equilibrium algorythm presented by GORDON and McBRIDE in the NASA report RP-1311: Computer Program for Calculation of Complex Chemical Equilibrium Compositions and Applications

CPep is based on Cpropep, Copyright (c) 2000 by Antione Lefebvre
with modifications and improvements. It is being released under the GPL and is free of charge. 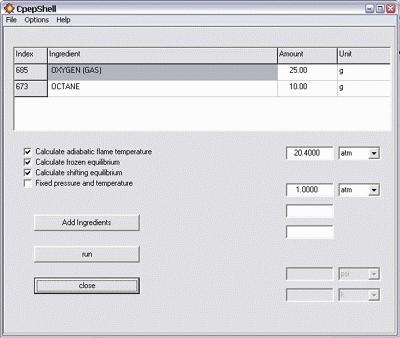 CPep is aimed at solving 4 problems:

The development of cpep is based on the theory pesented in:
S. Gordon and B.J. McBride, Computer Program for Calculation of Complex Chemical Equilibrium Compositions and Applications: I. Analysis , NASA Reference Publication 1311, October 1994.
Download pdf version

The thermochemical data were provided by Bonnie McBride of NASA Gleen Research Center. 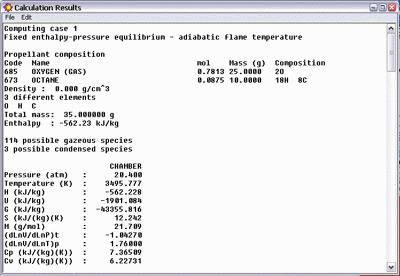 CPepshell provides a graphical userinterface to operate CPep under Windows. Install CPepshell in the same working directory as the CPep.exe. CPepshell uses the CPep.conf to locate the propellant data file – just as CPep.exe does.

CPep is based on Cpropep, an open source project created and maintained by Antoine Lefebvre (antoine.lefebvre@polymtl.ca). Original GPL source code for Cpropep is available here cpropep-src.tar.gz and thesource for the mathematical library can be found here libnum-src.tar.gz.